"This switch from Abram to Abraham may seem minor at first glance, but it is actually indicative of what is at the very core of our national Jewish identity; the anthem of the relationship between God and His chosen people. It symbolizes the eternal covenant He first established with Abraham and then guaranteed to maintain with his descendants for all time."

What's In A Name? Everything!

The Jewish name has always represented our essence.

Whenever I meet someone new, they inevitably ask if I am related to any other Landises they know. John Landis, the Hollywood director? Nope, no relation. Baseball’s first commissioner, Kennesaw Mountain Landis? Nope. Sketchy pro-cyclist Floyd Landis?  Also no. I usually stop them and explain and explain that my family has no distant cousins or long-lost relatives named Landis because it isn’t our original name.

Sometime after 1945, my grandfather’s youngest brother, William, petitioned to have his surname changed from Lefkowitz, a clearly identifiable Jewish name, to the more American-sounding Landis. The request was granted and the rest of his family followed suit. My grandparents were married as Paul and Rhona Lefkowitz, and changed their name to Landis before my father and uncles entered the picture.

It wasn’t unusual for Eastern European Jewish immigrants to use anglicized or truncated versions of their Jewish surnames. Chances are you’re familiar with the stories of relatives or friends who arrived at the gates of Ellis Island with surnames that were too difficult for the impatient immigration officer to pronounce. The timid immigrants could not protest when their Jewish names weren’t recorded accurately because they did not speak or read English.

This cultural phenomenon was so prevalent that it spawned an entire genre of self-deprecating Jewish jokes.

My favorite is the one about the Jew who went by the name of Sam Ferguson. Fresh off the boat from Europe, he knew that Yerachmiel Yakobavitch would be a mouthful for the immigration officers at Ellis Island. So instead of waiting for them to butcher his Jewish name, he figured he would just introduce himself as Jerry Jacobs.  He repeated his new moniker over and over while he waited in line to be processed at the port. When his turn finally came, he was so intimidated by the immigration officer that when asked for his name, he completely drew a blank and blurted out in Yiddish, “Oy! Shem fargessen!” (I forgot the name!). So the worker dutifully wrote down what he heard, and Yerachmiel Yakobovitch became Sam Ferguson.

This campy portrayal of confused and clueless Jewish immigrants being forced to take on random American names by immigration workers is actually part of the official narrative told today by tour guides at the Ellis Island museum.

My father’s family has been proud All-Americans since the late 1800s and my children are fifth-generation American Jews. They were not new immigrants who changed their names under duress. So, I always thought that the fact that my grandfather’s entire family voluntarily chose to change their name made them outliers. That is, until I read the new book,  People Love Dead Jews, Dara Horn’s fascinating critical analysis of the subtleties of modern-day antisemitism, and discovered that everything I’d been told about the name changes at Ellis Island was a big, fat lie!

First off, the intake personnel at Ellis Island were not incompetent blowhards, jotting down whatever they heard, (or thought they heard). They were highly skilled immigration officials who were required to be fluent in at least three languages.  Additionally, translators circulated the floor to provide extra linguistic support.  At any given time, there would have been someone on duty who spoke German, Polish, or Russian, any possible language spoken by Eastern European Jews.

Next, don’t assume that new arrivals to American shores merely paid a toll, had their passports stamped, and then quickly shuffled through a turnstile. The immigration process was prolonged and thorough, with documents carefully checked and certified, and the interviews lasting at least 20 minutes to ensure that the new immigrants would not potentially be a burden on American society.

Finally, during these interviews, no one asked the immigrants for their names, so no names were recorded, accurately or otherwise! The immigration officials worked off of the ship manifests that came from the port of origin in Europe and these manifests were based on passports and government documents. Since anyone who was improperly documented on the manifest was shipped back to Europe at the company’s expense, the records were meticulously compiled; they knew that any mistakes would cost the transport company money and sometimes the workers their jobs.

Yet, there are thousands of early 20th-century New York City court records that show Jews requesting name changes (including that of Lefkowitz/Landis). Horn cites the book A Rosenberg by Any Other Name: A History of Jewish Name Changing in America by Kirsten Fermaglich, which documents many of these court cases. In fact, by 1932, ten years after Ellis Island officially closed its doors, 65% of the petitions to change a surname filed in New York were Jewish-sounding names, and almost always filed on behalf of entire families. Strangely, very few of these records mention antisemitism as the basis for these petitions.

They do, however, mention the petitioners changing their name because they couldn’t find a job, or because their children were being picked on in school. The official reason given was that they had foreign-sounding names, with no mention of their Jewish heritage. In other words, the predominant mentality of Jews at that time was to hide their Jewishness, cowering under the heavy boot of discrimination. Instead of being proud of their Jewish identities and standing up against the antisemitism they were experiencing they chose to hide their heritage, discarding their Jewish names.

Horn does not offer a theory as to who first created this immigration fairytale or how it spread like wildfire throughout American Jewry. Yet, the reasoning and motivation behind this tall tale are clear. After thousands of years of exile and expulsion from countless countries, these new immigrants hoped that America would finally be a safe haven for their families, that the pogroms of the past were behind them, and that this stop in the Jewish journey towards redemption would be different.

Yet the sobering reality was that Jews were not welcome in early 20th century America; the insidious horrors of antisemitism also lined the gold paved streets. The fear and despair they felt at the prospect of history repeating itself was something they desperately wanted to shield their children from. Determined to give their children a better life than they left behind in Europe, they collectively told this folk tale of a silly mistake made by an incompetent worker at the borders of a country that welcomed them with open arms.

Contrary to what I thought, my family’s story is not unique; Jewish families seeking to successfully assimilate into American culture by willingly adopting less Jewish-sounding names were very much the norm, not the exception. The one thing that seems to be exceptional in our story is that my grandfather was upfront about the circumstances that led to our family abandoning the Lefkowitz name for Landis. I don’t know why he didn’t feel the need to hide it from his children as so many others did, and now I cannot ask him. My hunch is that by the time he told my father, the oldest of his three sons, he had already built a successful business and his family was fully integrated into American life, without their Jewishness being a liability. So my grandfather did what he always taught us to do; he simply told the truth.

In Hebrew, a name is not just a random grouping of letters that sound nice. Rather the name reveals its essential characteristics. The Midrash (Genesis Raba 17:4) tells us that the first man, Adam, looked into the essence of every creature and named it accordingly.

The same idea applies when it comes to selecting the name for a baby. For example, Leah named her fourth son Judah (in Hebrew, Yehudah). This comes from the same root as the word “thanks.” The letters can also be rearranged to spell out the holy Name of God. The significance is that Leah wanted to particularly express her “thanks to God.” (Genesis 29:35)

There are numerous instances in the Torah of people who had their names changed, but the change actually solidified their Jewish identity, carrying them onward towards their destiny.  For example,  at the end of the Torah Portion of Lech Lecha, God adds the Hebrew letter hey to Avram’s name and from that point on he is known as  “Avraham,” which stands for Av Hamon Goyim – “the father of a multitude of nations.”

This switch from Abram to Abraham may seem minor at first glance, but it is actually indicative of what is at the very core of our national Jewish identity; the anthem of the relationship between God and His chosen people. It symbolizes the eternal covenant He first established with Abraham and then guaranteed to maintain with his descendants for all time.

In this covenant, Abraham takes an oath of fealty, swearing that he and his children will loyally serve as divine emissaries on earth, a light unto the nations, and in exchange God designates the Land of Israel to them in perpetuity.

It is at that moment, when Abraham accepts his new name and all it represents, that this unbreakable bond is forged.  And it is in this week’s Parsha of Vayeira, that it is indelibly sealed. At God’s request, Abraham circumcises himself, and during his painful recovery, God reassures him that He will always safeguard the Jewish future and nurture Abraham’s future progeny through any hardship. If I could travel back in time to early 20th century America, I would tell the Jewish immigrants that they had nothing to worry about.

"This switch from Abram to Abraham may seem minor at first glance, but it is actually indicative of what is at the very core of our national Jewish identity; the anthem of the relationship between God and His chosen people. It symbolizes the eternal covenant He first established with Abraham and then guaranteed to maintain with his descendants for all time." 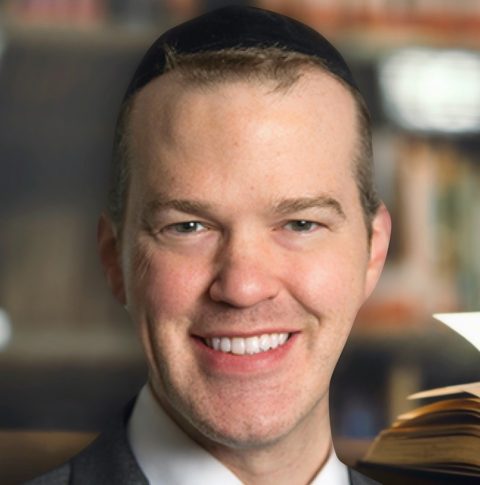 Rabbi Pinchas Landis is currently the Director for Partners Cleveland (www.torahcleveland.com) with a mission to connect Jews from all backgrounds through the study of Torah. Rabbi Landis grew up in Atlanta, Georgia, where his family was very active in their Conservative synagogue. After graduating from a performing arts high school, he traveled the country for a year as International B’nai B’rith Youth Organization (BBYO) President. During that time he developed a keen interest in traditional Judaism, ultimately becoming Torah observant. He has since spent a total of nine years learning at Yeshiva University, Ohr Somayach Tanenbaum College, and the Ner Israel Rabbinical College. He has also done postgraduate work towards a Masters in Community Counseling at Johns Hopkins University. He worked as a Jewish outreach professional in numerous cities and was the founder and congregational Rabbi of a kiruv shul in Cincinnati, Ohio.

Rabbi Landis is a dynamic and fascinating teacher, who inspires his students with his exuberant personality and extensive knowledge of Jewish History. He is also a featured speaker on TorahAnytime.com and has several podcasts on JewCast.com. His content can also be found at www.rabbilandis.com